Over one million visitors in 2019! 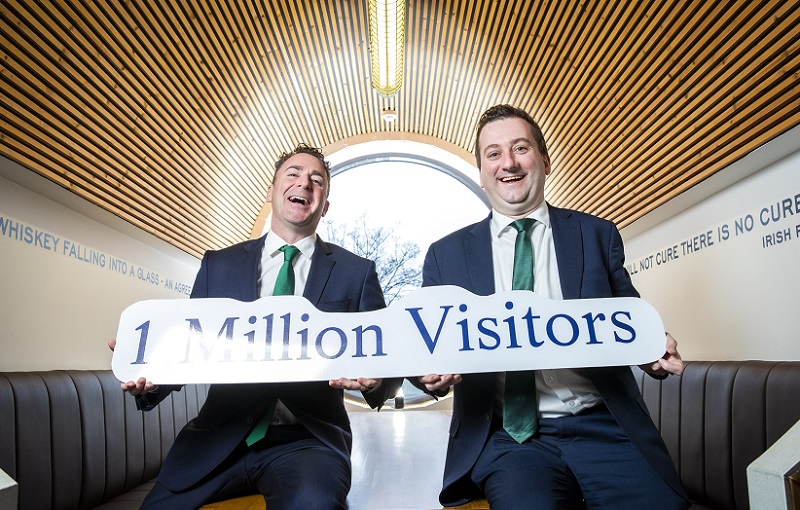 Key figures and trends include:

There was a 10.5% increase in visitor numbers last year – from 923,000 in 2018, to 1.02 million.
North America remains the top market of origin for visitors to Irish whiskey distilleries, with tourists from the US and Canada accounting for 34% of all visits in 2019, followed by Ireland (13%), Great Britain (12%), Germany (10%) and France (7%).
2019 also saw an increase in visitors from outside the top five markets of origin, with reported increases in visitors from Australia, Italy, and the Benelux and Nordic countries.
Between 2018 and 2019, the highest increase – 32% – was seen in visitors from Germany, while visitors from Ireland (north and south) grew by 16% and visitors from France grew by 15%.
These increases were offset slightly by falls in the numbers visiting from North America and Great Britain.  While North Americans are still the highest proportion of visitors to Irish whiskey distilleries and brand homes, their numbers fell by 8% last year.  The number of visitors from Great Britain also fell slightly – by 2%.
There are 17 visitor centres and brand homes in operation across the island of Ireland, with more planned to open this year.
The number of staff directly employed in visitor services in the Irish whiskey industry increased by 15% in 2019 – from 356 to 409.
While existing visitor centres recorded slight growth in 2019, the bulk of the increases was accounted for by the opening of four new visitor centres during the year.

Exceeding one million visitors annually is a massive achievement and I congratulate the managers and staff of our 17 visitor attractions on achieving this milestone.  Irish whiskey distilleries and brand homes are now firmly established as a star performer within Ireland’s all-island tourism offering.